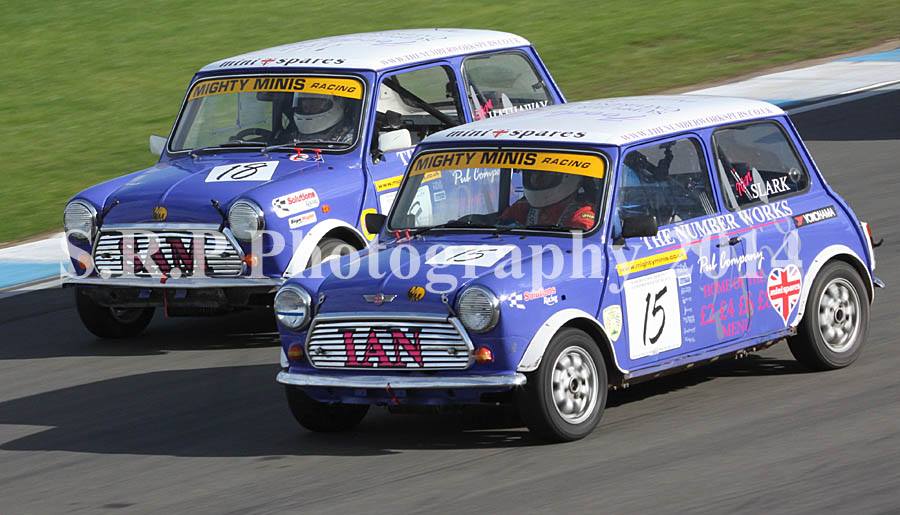 After five years of trying, CCRR owner Ian has managed to secure his second race win of the year and took the 2014 Mighty Mini championship after a nail biting final two rounds at Donington last weekend. Heading into the weekend Ian had a ten point lead over nearest rival and team mate Sam Hathaway, who was closely followed by Paul Inch just one point adrift. After race one it was clear that Hathaway was slightly off pace on the day and could only manage a seventh place finish. Inch however was on fine form and took the win, with Ian a slightly frustrated fifth place.
This meant that Inch was then just one point behind Ian, so whoever was in front on the road at the end of the Sunday race would win the title. Hathaway was still in with a chance if the two guys in front finished lower than seventh and he took the win.

Sunday was a nerve racking morning for all concerned but the weather stayed dry much to everyone’s relief.  With the reverse grid meaning Sam started on Pole, Ian 3rd and Inch 7th the first step was to get off the line well and stay out of trouble for the first couple of laps. Ian did manage a good start and took the lead early on, however Mini racing being what it is this was not to last with the places changing regularly. Inch came through to lead for a few laps but with some help from team mates Damien Harrington and  Sam Hathaway Ian was able to take the lead agin and the win.

The Number Works pubs sponsored team had a great year taking first and  third in the championship with many great race weekends and results.  Special thanks to Martyn Hathaway (“The Boss”) and of course Slark Race Engineering for your help and support this year.